This guide aims to introduce you to the variable mechanism in Integrity, as well as the call fixture type that can be used to fill variables with values. As a "side effect", you will also see how to use the Integrity Test Runner Eclipse plugin to monitor and control test execution.

It is highly suggested to finish the Getting Started tutorial first, because there will be references to that guide within this one, and the project setup is very similar.

We will require a basic setup as described in Getting Started. You should thus create a new project named "CallsAndVariables", then add the Integrity libraries to it and create a package integrity.tutorial.callsandvariables, in which we'll then need the following fixture class:

As you can see, there are two fixture methods present in this fixture class. The first one takes a minimum and maximum parameter and determines a random number between those two (yes, I know, generally it's not really desirable to have non-deterministic factors like random numbers inside automatic test sequences, but it's just for demonstration purposes). The second method determines whether a given number is greater than an other given number.

Next, we will create an Integrity test script which calls the first fixture method and stores the result in a variable for later use. But first let me introduce you to the concept of variables in Integrity. It is rather similar to variables in most imperative programming languages in that there are basically two kinds of variables:

Calling a fixture and storing the result

Now it's time to do some actual work! Create a folder called "Integrity" for your test scripts and a "fixture.integrity" text file inside it. This file should contain the following fixture declarations:

Notice that we declare two different types of fixtures this time, one using calldef and another one using the already-known testdef keyword. Both of them result in their respective method being executed by Integrity, but only in case of test fixtures, a comparison with an expected value is done. Call fixtures support a different feat: the result value they return can be stored in a variable for further use, for example as parameters for subsequent call or test fixtures.

To make everything a little bit more interesting, we are going to put the test suite into a different script file. You will notice that Integrity doesn't care much about the way in which you structure your script files: you may put everything into one file, create a new file for each fixture and suite definition, or anything in between (which I by the way recommend - you should definitely use the freedom Integrity gives you to structure your test suites in a suitable way).

Create a file named "suite.integrity" with the following content:

We'll go through this second file line by line, as there are several new constructs used there.

You already know how to set up the launch configuration for the console test executor from the Getting Started tutorial. That setup will do just fine in this tutorial as well! The one thing that slightly differs is the command line:

Remember that we made our test a little "non-determined" by introducing the randomization? Because of this, there's basically two possible results: the greaterThan comparison can fail or succeed, depending on the generated number. Try to run the test a few times to see this for yourself - in the end, this definitely proves that our randomly generated number is actually forwarded to the test fixture by means of our declared variable! 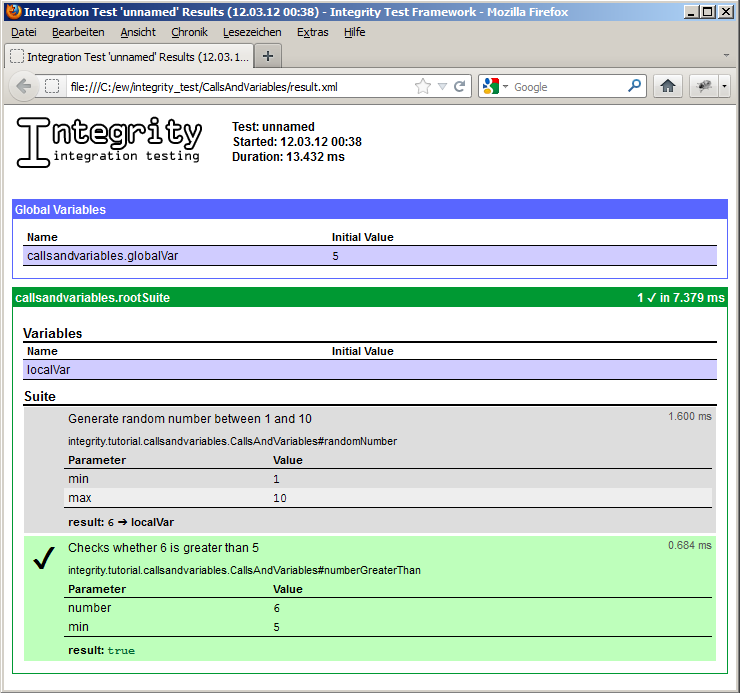 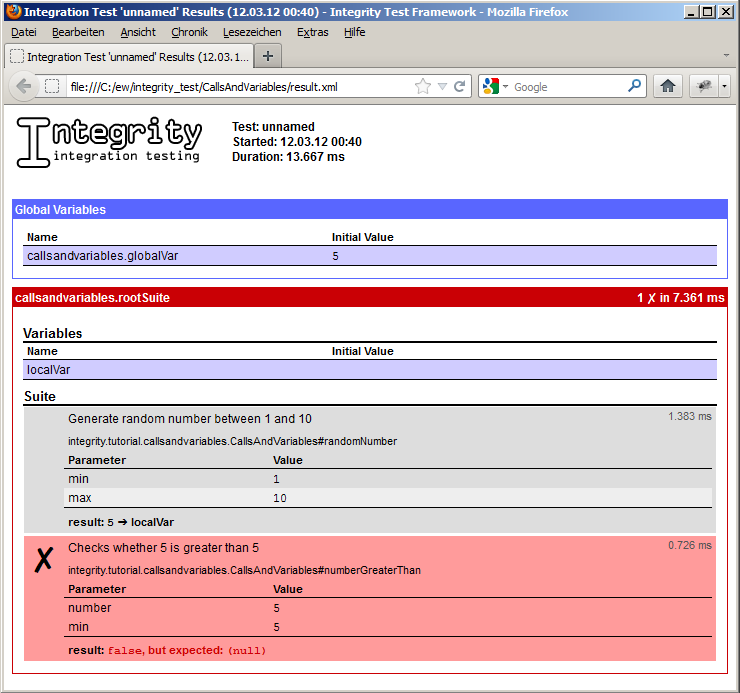 Now that we have multiple statements being executed, it is the right time to introduce you to another tool: the Integrity Test Runner Eclipse plugin. While the Test Runner is the runtime for execution of our test scripts, the similarly named Eclipse plugin is designed to control and monitor the Test Runner. This works both locally and remotely, as the communication between these two uses a TCP connection.

First, you'll have to open the view "Integrity Test Runner" via the Window -> Show View -> Other menu.

That will present you with the following new view:

There's not much to see right now, as we haven't connected to a test runner yet. But the general layout is already visible: on the left-hand side, we will see the test script being executed in a tree-like form, and on the right-hand side, detail information can be requested for entries selected on the left.
In order to make it easy to connect to the test runner before it actually starts executing the tests, you can use the "--wait" parameter (or "-w" for short):

Run the test runner launch config with these parameters, and you'll see that the test runner stops after resolving the test model. At this point, it waits for you to connect and manually start test execution! Use the button on the upper left of the Integrity Test Runner view to open the connection. The plugin will ask for the host to connect to - "localhost" is the default and just fine for now, as we do work locally right now. After a connection was established, the plugin will download the test execution script from the runner and display every single step that will be executed as soon as you start the run on the left:

Notice that the second statement - our actual test statement - does have a block of ??? in its description text. These are there because the value that will be given to this test fixture isn't determined yet, as it will be returned by the first statement! 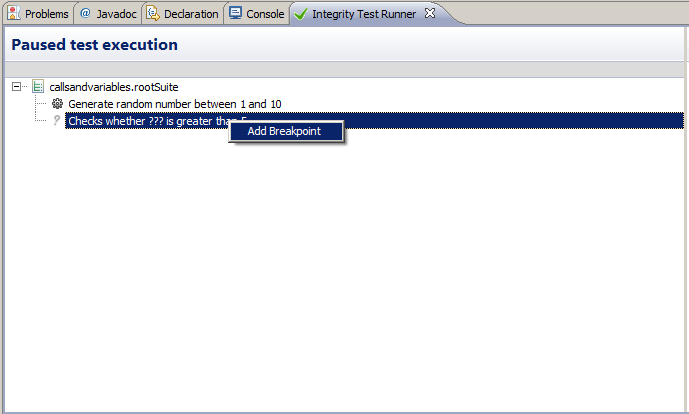 A small, black triangle will appear in that line - this is the visual indication of an active breakpoint. Now, start test execution with the "play" button on the upper right! You should arrive at something like this: 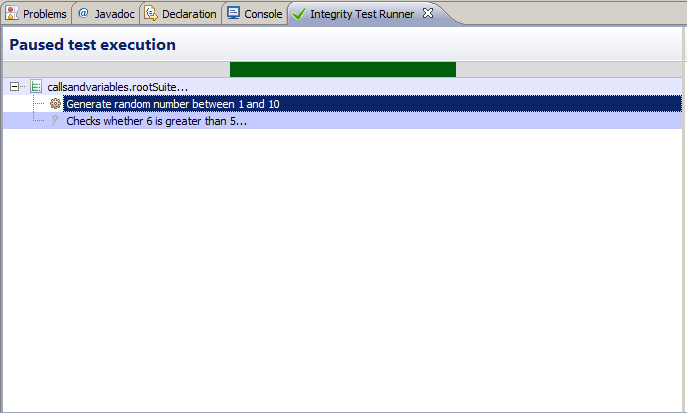 The first statement has been selected in order to take a look at its details on the right, but there's much more to see on this screen:

You might also want to try double-clicking on one of the statements or the suite name. That opens up the corresponding test script and jumps to the corresponding line, which comes in handy when fixing test failures.

When you've finished investigating the situation, continue test execution by clicking "play" again! In our case, the final result looks like this:

Of course, depending on the number that was generated randomly in your case, your result might differ - your test might have failed for example!

Now that's it for the second tutorial. Feel free however to experiment a little bit further with your project! You might play around a bit with the single-stepping capabilities of the Eclipse plugin, or add some more variables, maybe in different suites as well. And I definitely encourage you to try the keywordconstant (instead of variable) when defining variables: constants are mostly used like variables, but you can't store any values in them other than the first value put there at definition time - basically like constants in most programming languages.

I plan to write some more tutorials in the future which cover a lot more of the basic aspects of Integrity in detail, and maybe even some more about the really advanced topics like table tests, arbitrary parameter fixtures, fixture factories or custom comparator fixtures. But that'll probably take some time ;-)