Integrity v0.17.0 comes with the following major changes from its predecessor, 0.16.x:

Integrity now has its own in-code documentation format. It's very much inspired by JavaDoc (which is a time-tested and well-known solution to the in-code documentation problem, so I guess it's a good idea to just lean on established standards...) and allows you to attach documentation comments to packages, suites, fixture definitions, constants, forks and variants. In Eclipse, it looks a bit like in this example: 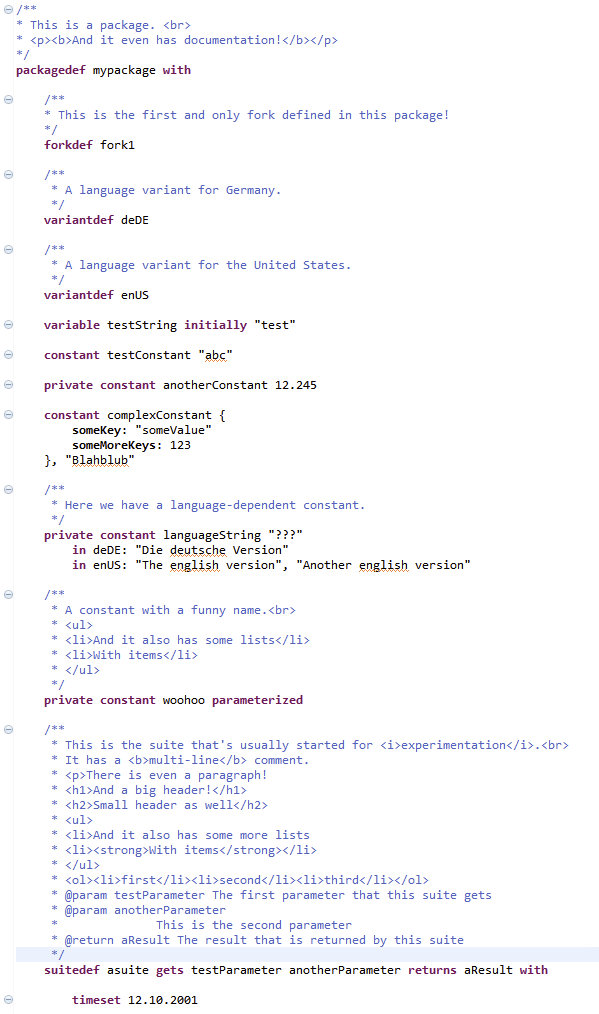 Of course the documentation texts support the same HTML-inspired formatting language that JavaDoc uses (well, at least all the well-known constructs, it's not 100% identical) so you can mark up your texts with headers, bold parts, paragraphs and lists.

The documentation comments are used in two ways. For one, they are displayed like JavaDoc in Java code in the Eclipse editor when writing tests. For example, the documentation for a fixture is displayed alongside that fixture in autocomplete or mouse-over scenarios. Likewise with suites, constants et cetera. 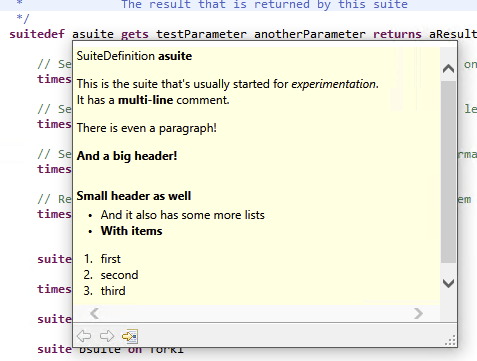 But just like JavaDoc, it is also possible to have a documentation generator run over your Integrity files, parse out the data and generate some nicely-formatted HTML documentation! This documentation features a package tree structure and shows all your suites, fixtures etc. sorted by packages. It even has a neat feature that not even JavaDoc can match: there's a real, full-text search engine integrated directly into the HTML documentation (it's fully Javascript-based, so there's no need to run any server for this, of course). An example for this generated documentation can be seen here: Click me!

IMPORTANT for JENKINS users: If you try to serve the generated HTML doc via the Jenkins-integrated web server, you may encounter problems due to the default Content Security Policy enforced by the Jenkins server. In particular, the policy must allow for Javascript to be loaded from the same server that the HTML is on, and it must allow for "data:" style embedded images in CSS files. The policy setting can be changed via a system property, the following example works fine: System.setProperty("hudson.model.DirectoryBrowserSupport.CSP", "default-src 'none'; img-src 'self' data:; style-src 'self'; child-src 'self'; frame-src 'self'; script-src 'self' 'unsafe-inline';"). You may read more about this content security feature on the Jenkins website.

A typical task in automated testing is to validate the behavior of a system under specific, deterministic date/time environments. A common way to implement this is to re-route all relevant date/time queries via some kind of proxying mechanism, through which one can artificially set the time to be used by the system for business processes to something that deviates from realtime. It was already possible to configure such a proxying mechanism (= to actually set the time to be used) by using calls in Integrity, but especially when working with multiple forks, this can quickly get tedious, as you usually want the entire distributed system "in sync" with regard to your fake date/time. For this task, Integrity now adds a new command "timesync", which can be used to perform date/time setting on one or multiple forks. It looks like this:

You can use the timeset command anywhere in any suite, regardless whether it is called on a fork or on the master (timeset commands on forks are relayed to the master and executed from there, so one of the forks can even set the time of a different fork!). It supports progressing time as well as the more simpler concept of a "frozen" time that always stays the same. And in case of progressing time, where the previous mechanism inevitably led to deviations (due to your inability to call the "set the time" fixture on all forks at the exact same time) this new algorithm actually calculates the internal state of the test time generator on the master and pushes that to the forks, effectively resulting in a perfectly synchronized timebase across all forks and the master.

Besides setting absolute time as shown above, you may also "move" the test time relatively to the previously configured test time. To do this, specify the time difference instead of an absolute time, like this:

Basically you specify the duration in years, months, days, hours, minutes, seconds and milliseconds and the direction (+ for a forward jump, - for a backward jump). As shown in the examples, you may use short units (y/mon/d/h/m/s/ms) or longer, descriptive units (year, month, day, hour, minute, second, the trailing 's' is optional), but the unit MUST follow the number without a space in between! Note that this feature only works since Integrity 0.17.20.

Of course, in order to actually apply the configured time in your application, you need to have some kind of override mechanism by which you can override the normal system time in place. A suggestion for such a mechanism is provided in Integrity (look at de.gebit.integrity.runner.time.TimeAndDateSingleton), but you could just as well use your own, especially if you do it right and don't want to get any dependencies on the Integrity test runner jar into your production application. The way in which Integrity pushes the necessary state to calculate the "fake time" into the application is via a de.gebit.integrity.runner.time.TestTimeAdapter. This adapter must be implemented by some part of your application (maybe the part where your fixtures reside in) that is available during automated testing, and you then have two ways of letting Integrity know about your adapter implementation:

There's extensive in-code documentation on all these interfaces/implementations, so you are greatly encouraged to take a look at them for further details! And there is also a Github Issue Link.

Besides these big two features, there have been some smaller changes as well: